Home Uncategorized An Unexpected Shower (and now a new donation)

An Unexpected Shower (and now a new donation)

Unexpected, so it’s not our usual shower! 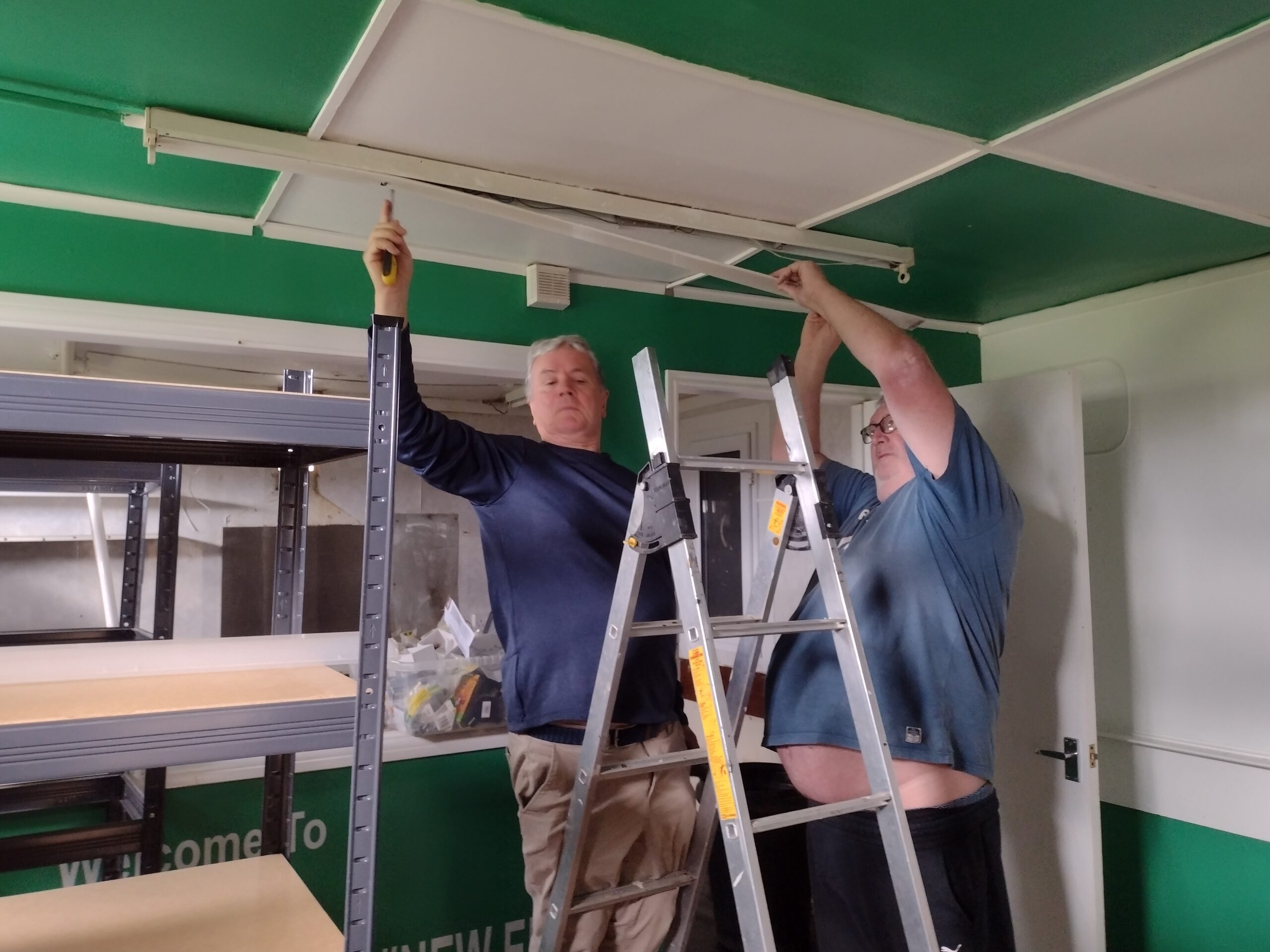 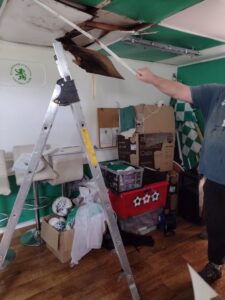 We began to remove old lighting tubes to fit new LED battens in the Portakabin. Shedders Paul and Dave are just the right size for the job.

We decided to rid ourselves of a bulge in the hardboard roof lining in order to eventually fit a new ceiling panel.  Paul gave the piece a strong tug and it began to come down.

Along with a couple of litres of stale water

The bulge was a blister just waiting for us to lance it!!

Clearly there was a water path through the roofing felt.  The only option was to perform an emergency repair with some bitumen type paint. 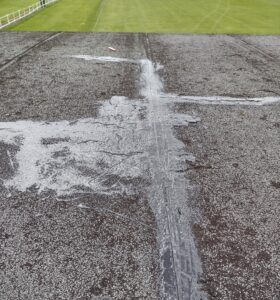 That was Graham’s job on Saturday morning as he enlisted as a member of the Black Hand Gang. Time will tell . . . . . and a few showers.

We need a mini fridge for the milk. Anyone got anything like that to offer? 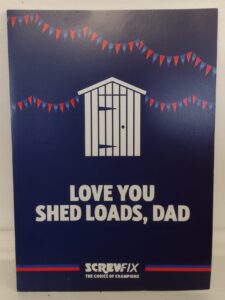 The way to a Shedder’s heart.

STOP PRESS.  Rob Shilson of Whitby Shed (one of our Trustees) has suggested we have their table top which is not used. Pick up on Wednesday. Thanks for reading about what we needed, Rob, and responding!

We are getting some worktops on Monday, courtesy of Howden’s Joinery and soon some kitchen carcases too for the galley kitchen and for storage in the main workshop.

Over the next couple of weeks we aim  to gather together the equipment stored in various places so we can begin to function as a normal  Shed . Then further Shedders to work on banter! 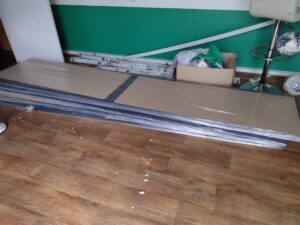 We collected the 5 worktops donated by Howden’s Joinery, Stockton. The long and the short of it was that Gary (long) and Graham (short) fetched and unloaded them in two trips. It had been raining, so Graham inspected the floor for signs of water ingress from above. Bone dry except for one drip (yes, make the obvious joke). It was on a part of the roof that the sealant had not reached.

We have been awarded £1000 for Shed development from the Arnold Clark Community Fund which supports new start up projects. The money is very welcome but so too is the support of organisations, businesses and individuals of all sorts. They make Norton Shed a genuine community effort.

Read about the late Arnold Clark in this Wikipedia link https://en.wikipedia.org/wiki/Arnold_Clark

A self made man who never forgot his origins.

An Aussie T-Shirt for Graham

Here is the design. 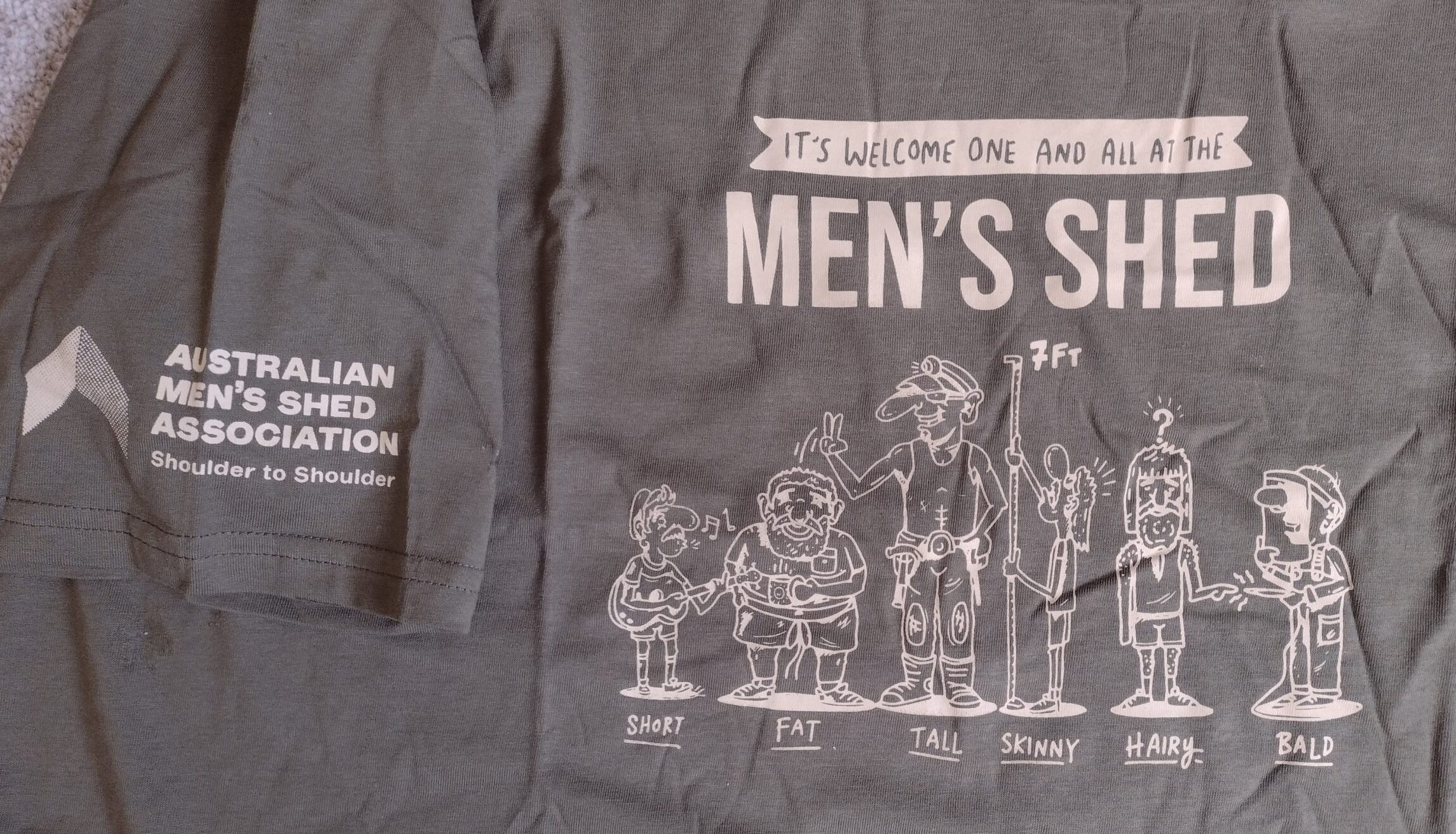 What kind of Shedder are you?

and on the balding side of hairy! What does he look like wearing the T shirt? 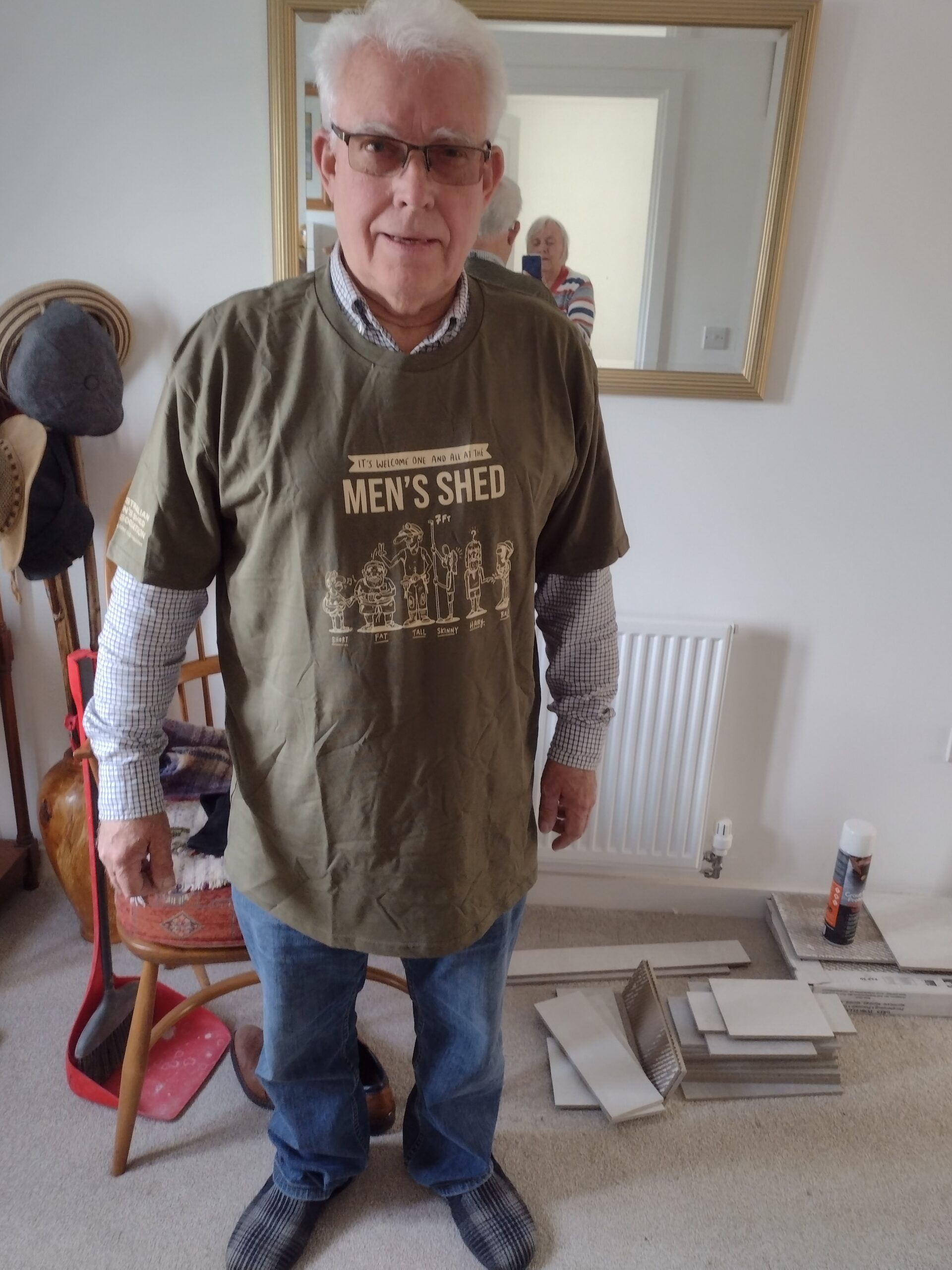 Is he one of Ken Dodd’s Diddy Men?

It keeps his shirt clean:-)

Shedder Dave Tonner (Scotty Dave) has a T-shirt design for us which will soon be going into production we hope.

A Shed Song from Australia, the words of which were the inspiration for the T-shirt cartoon