We are beginning to take on some new Shed attenders and to engage in more normal Shed activities. 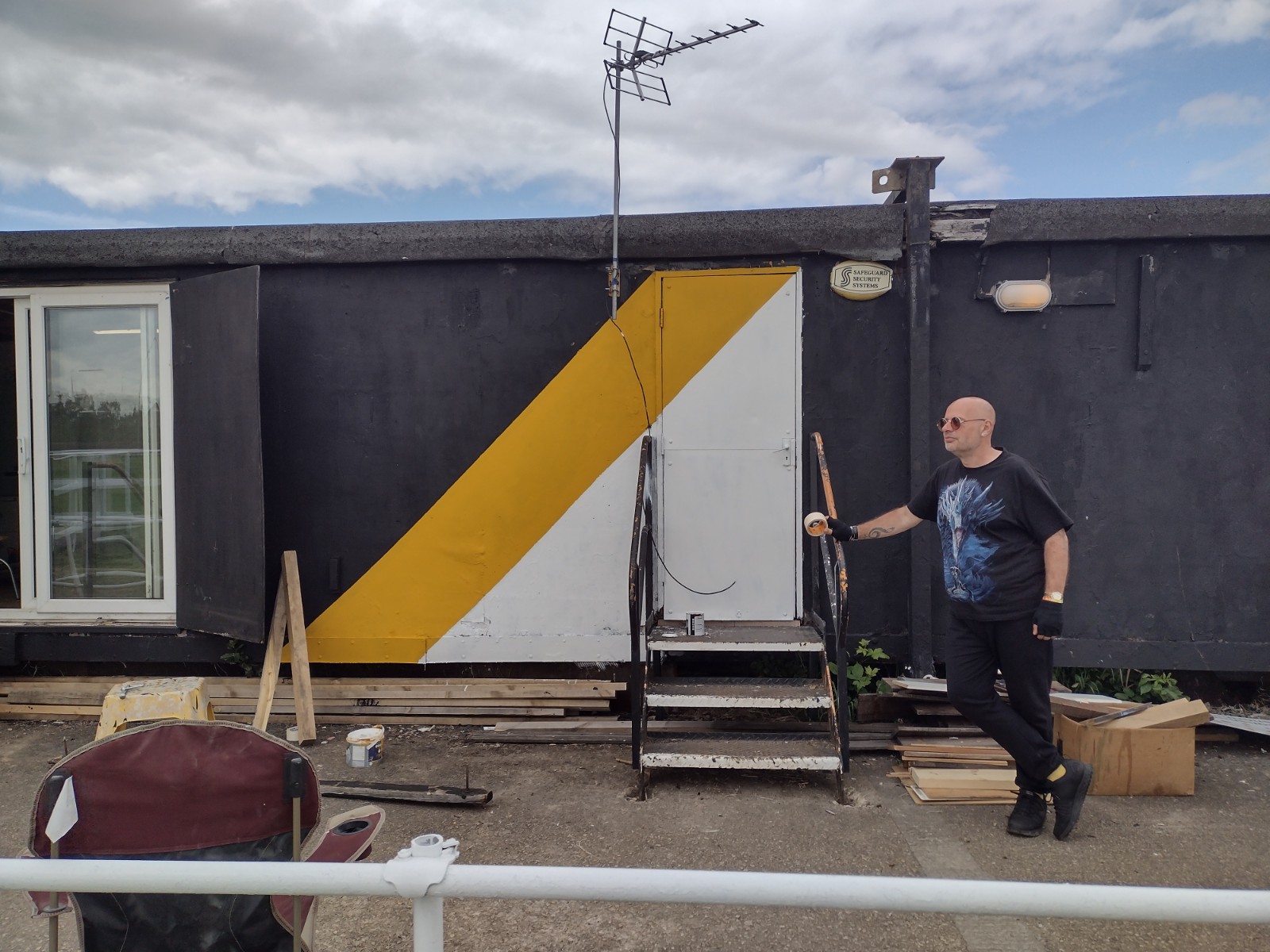 A new man, Colin, came on Tuesday. An ex-woodturner and a Meccano fanatic.  He helped move equipment from the switch room onto the new long bench. Pat & Paul got on with finishing the pedestal units supporting the worktop. Can now put screws and small tools in the 6 drawers. Railway Dave and Paul mounted a wall backboard to the left of the patio door. Some problem solving was required on the mounting of the security beam  across the plywood doors. Solved by new man Colin providing a longer bolt from his garage!

Meanwhile Graham and visitor Brynn worked on widening the yellow stripe and finishing the white triangle.  Derek and son Gary joined in the shifting and debates on the best way to solve problems (some of our own making).

Scotty Dave was contacted on Tuesday evening and agreed that using a Perspex sheet (1000 x 700 mm) would be a good idea to mount letters on to identify the Shed. The sheet then mounted on the Portakabin wall. Ultimately a couple of solar downlights will light up the scene at night.

On Wednesday evening Graham applied further bitumen sealant to the parts of the roof in the hopes that rain will not penetrate through surface cracks in the roof covering.

On Friday we are welcoming a second new Shedder, Bob. We hope to get some woodwork going. Railway Dave wants to make some of the French cleat bars. These require a table saw which will be brought to the Shed.

It is so gratifying to see all coming together. We will be restoring the water supply as attention of some Shedders will turn to the kitchenette and washing up area.

On Friday (morning and evening) we achieved a lot, ending up with provision for more LED fittings in the switch room (having taken the ceiling down), more bitumen on the roof, the third set of shelving erected, a new workbench opposite the long one,

SATURDAY today and a trip to Howdens to discuss the units to be put on wheels under the worktop.  Came away with the 3 we need! More assembly for Pat & Paul next week (though one is a ready made unit).  Dave Tonner has been on a spending spree (small one!) at B&Q. We have another Ryobi drill amongst other things.

Back to Bob, who did come on Friday. He has limited sight and coming to a Shed where work is being done can cause people to realise what they now cannot do that they used to do with little effort. We stressed that the morning was about him getting to know us and us getting to know him. He met a number of the Shedders and also Dave Geldart of the Sports Charity. Guess what! They know each other and Bob knows others that he used to play squash with.

You might think about Bob’s feelings and all  he cannot easily participate in, hands on. But what about his experience? What about his know-how? For example, he was shown a piece of 3D printing (of the Shed logo). He understood how it was made because one of his last work responsibilities at work was for lithography (think it was that!). It involved a compter controlled laser and metal in an oil bath.

Bob is an expert. He showed some of his super honed chisels. That caused us to think that maybe he could show us how to sharpen tools properly. Teaching us the right approach and techniques. He has an array of woodworking planes, two unusual ones are pictured below. Some of his tools would be wonderful discussion points. He made a wonderful rocking horse. Maybe he could instruct as to what to do and one or two work on it over a period. Carving (shaping) the head is one starting point that Graham likes the sound of.

Above all, the success of a sustainable Shed is appreciating other Shedders for who they are now, which their past endeavours have shaped in fact. Like us all. This week we welcome octogenarians Colin and Bob who have yet to meet! 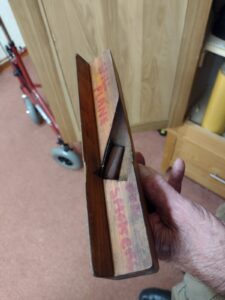 Not easy to see but this is a plane to make curls of wood that can be used as spills to light tobacco pipes. An angled blade. 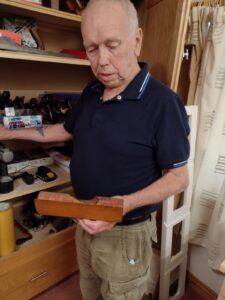 Bob with the plane in his hand. 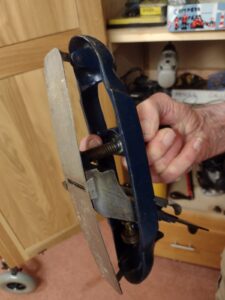 This plane has a flexible bed that can be set for convex or concave surfaces.

Shedder Scotty Dave wanted a  pair of cup holders for his Citroen car . . . . .

He had seen what he wanted on the “Thingyverse”, the library of instructions for things that people have made on 3D printers. He sent it to Graham who passed it on to son Kevin (like Dave a Trustee of the Shed). Kevin ran his 3D printer and the result is below.

The most amazing thing is that Bob had used similar technology in his work. How cool is that. 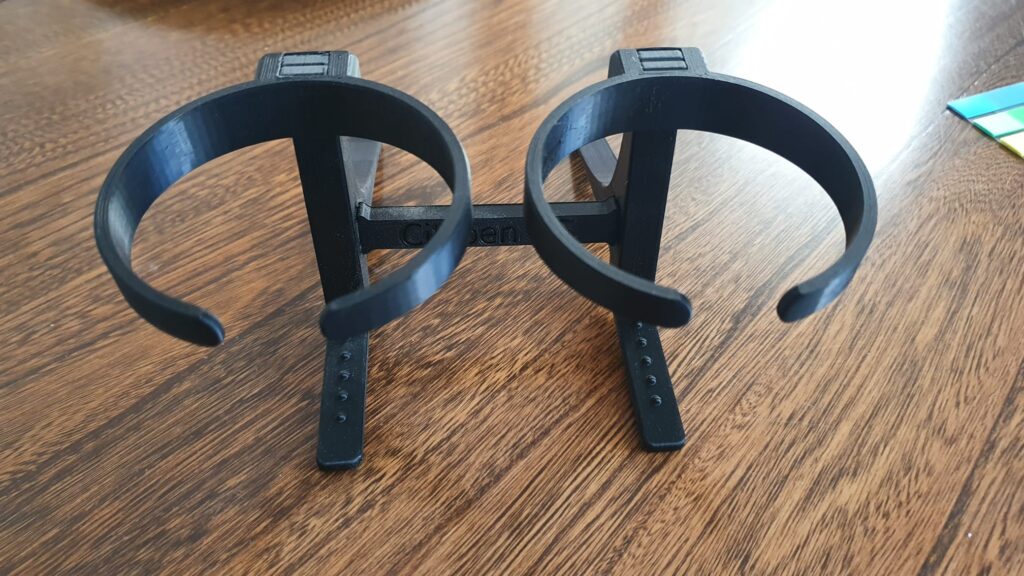 Now for the strength test of full cups going over bumps

Message from Frome Shed in Somerset

Heartiest Congrats on some great progress on the Norton Men’s Shed ! – Well done all.

Best wishes to all the Normens!

Finally this week, the entrance step handrails have been painted. 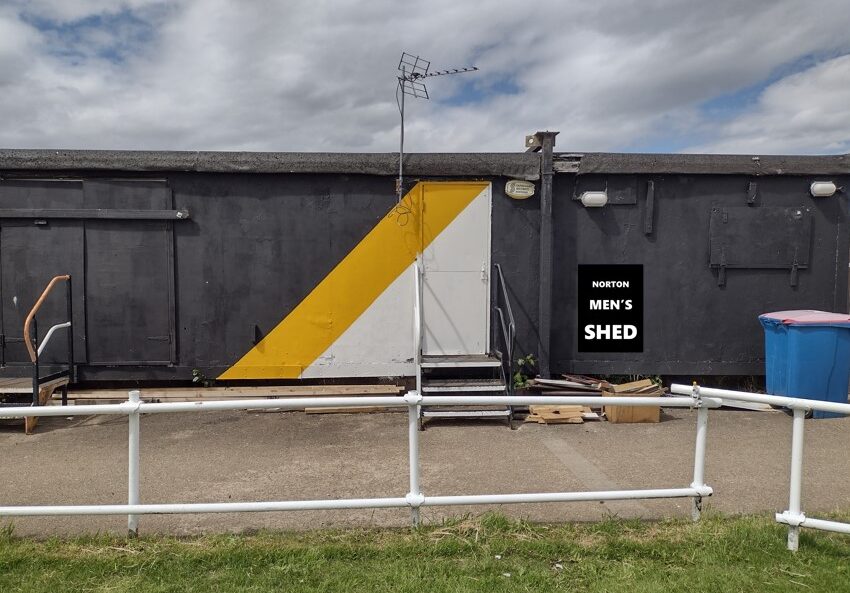 White handrail to left and black to right. Complementing the Portakabin design