What could possibly go wrong?

It was a meeting, not yet a workshop, and it took place at Norton’s Costa Coffee. Four guys were expected.

Graham left his mobile phone at home. That meant he was not contactable by one of the 4 who was waiting outside Costa. Three were inside but tucked round a corner. Sorry Gary – see you Monday instead!

Two Dave’s and Graham had quite a jolly time really, sipping coffee and looking at pictures of what other Sheds got up to.  Three active minds bounced around the table (coffee does that to some people).

The time spent together proved to be a real meeting of minds as to what the Shed could be.  The 3D printing was discussed and Dave Tonner revealed his hobby of vinyl printing on objects. Interesting. Dave Roberts shared that he enjoyed working with wood in his own Shed but wanted to do the same in the company of others.

Yes, a Shed can be anything the members want (within reason).

As Costa Coffee began to empty and the staff were cleaning the equipment Graham thought we ought to mark this first meeting with a photograph. The member of staff agreed to take a group photo. Graham was reminded by DaveR that he had left his phone at home (Dave kept hammering home that point)  so Dave’s phone was used.

As the staff member lined up the photo, Graham joked that DaveR should not be included in the picture. It was a joke! Imagine Graham’s surprise when DaveR forwarded the photo and there were just two heads in it. DaveR denied he’d edited himself out.

Thus the photo marks a first meeting of Norton Men’s Shed. An avatar of Dave Roberts is added plus a hovering ghost of Gary Roach. 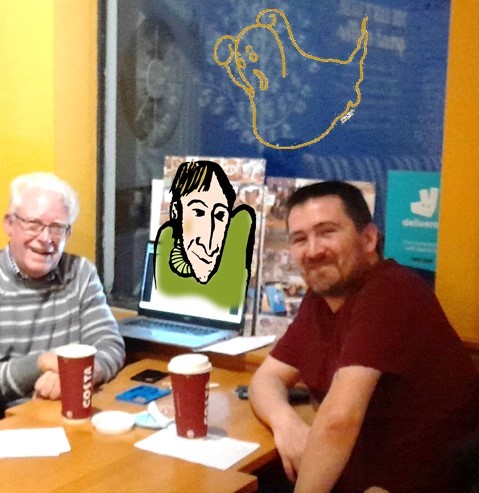 DaveR is unrecognisable and Gary’s sheet covers his identity