Realising a Pole Lathe, A Taste of Wood Turning, An Aussie Sail

I mentioned to my Norton son about possibly making a pole lathe with my two grandsons. He produced two books with details in. 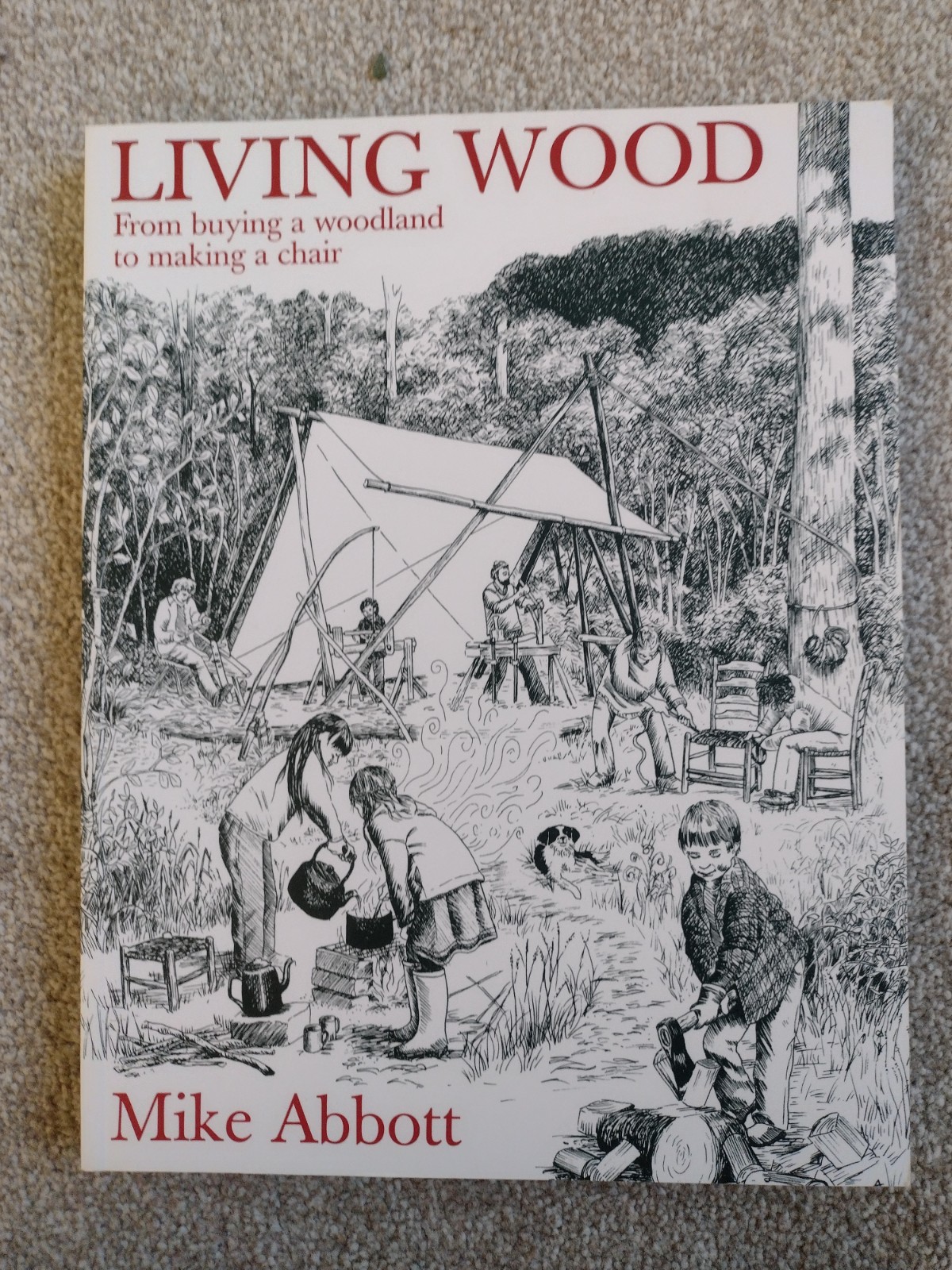 Graham loves this cover illustration. Look carefully and you will see a pole lathe in the background. Notice  the things kids are doing too with a fire, boiling water and an axe! 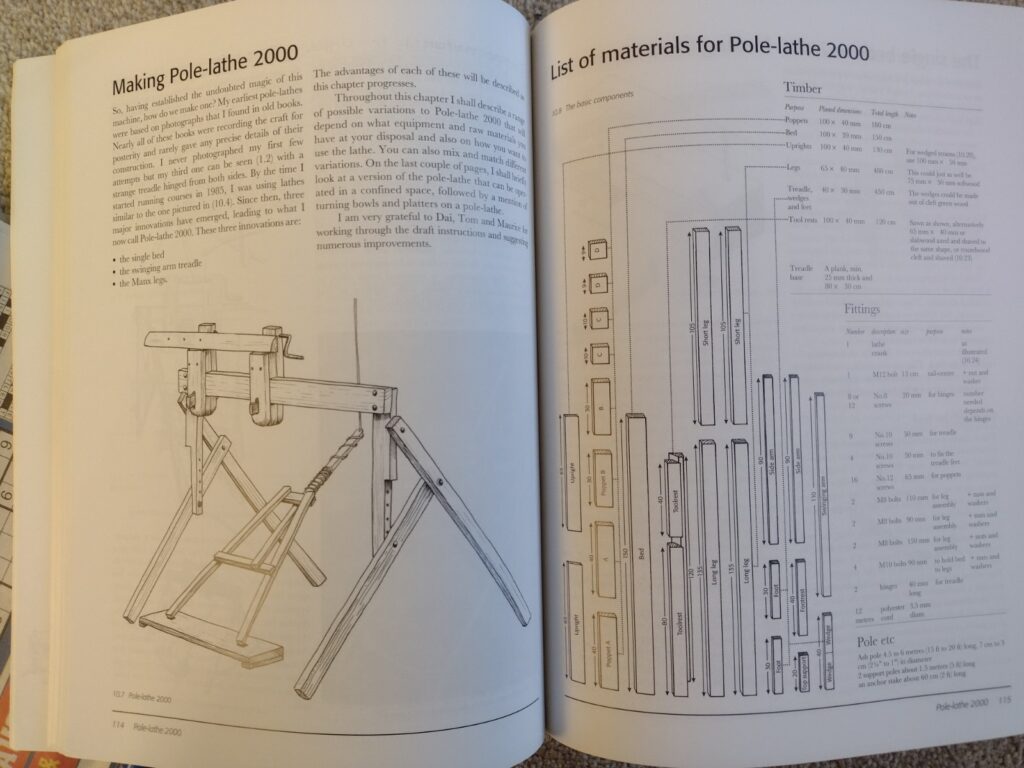 How to make plus a cutting list of parts.

Soon we will access to equipment that Sheds normally have. Paul, Pauline and Pat visited Staithes Shed and saw the kind of thing that is meant.

They tried their hand on a wood  lathe. Below are a couple of video snippets taken today of Shed trustee Kevin starting to turn a bowl from a large beech  blank. 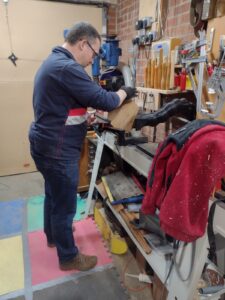 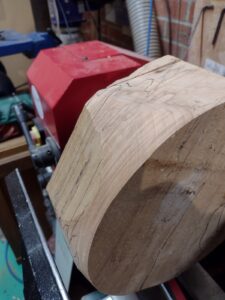 Starting to knock off the edges of the blank. 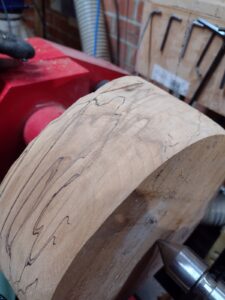 Look at the beautiful grain. 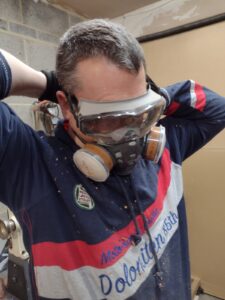 Wood chips come off at all angles (see the next video. Kevin put on his protective frog face.

Graham’s other son lives in Australia. Not having seen the family in the flesh for 3 years, Graham wanted a memory piece of  Oz, an Australian Sail used to keep the sun off.

In Graham’s new garden it will be keeping the rain off! 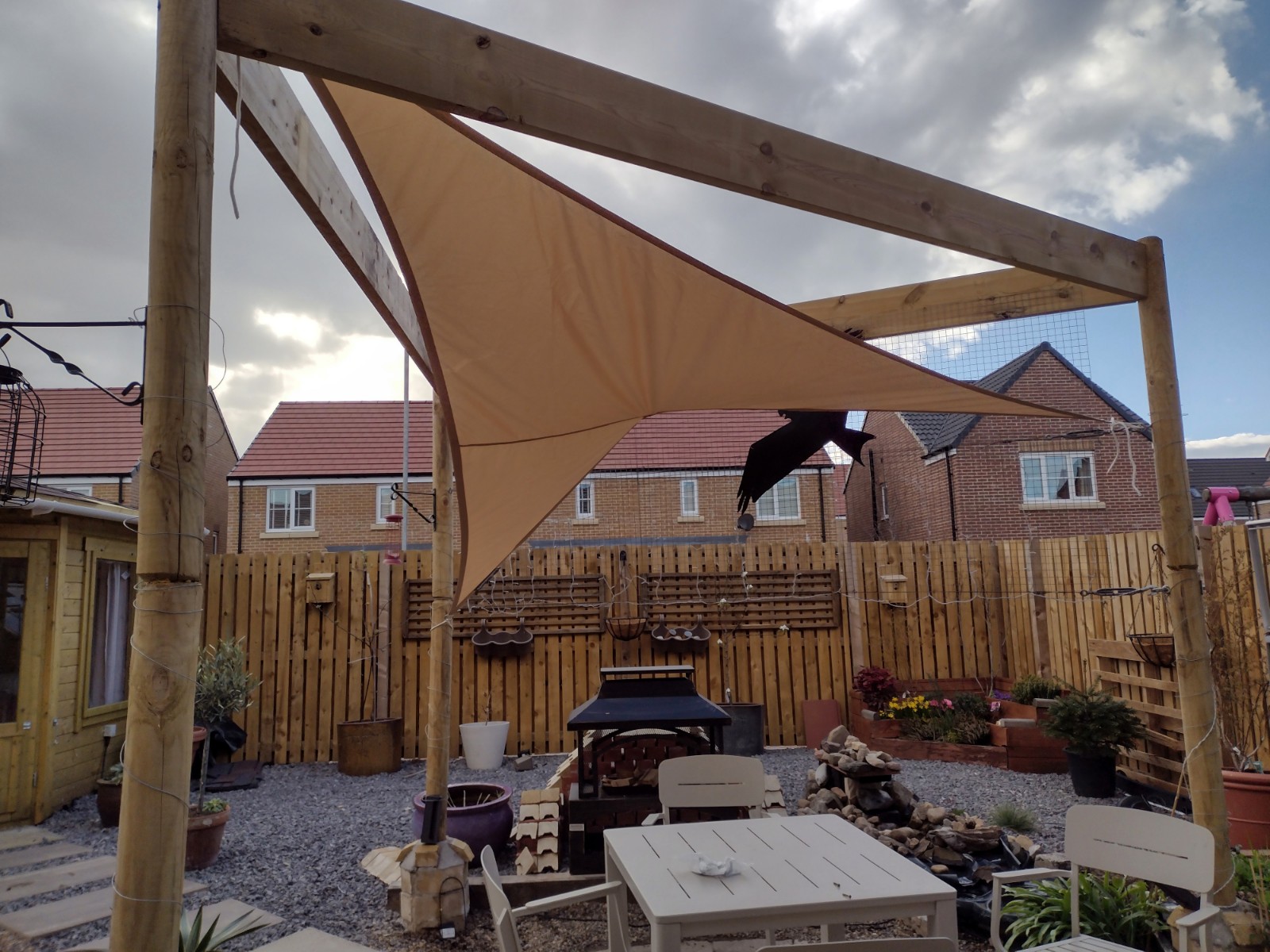 The site was bare when Graham & Joan moved in.

About a woodturner on the Glebe 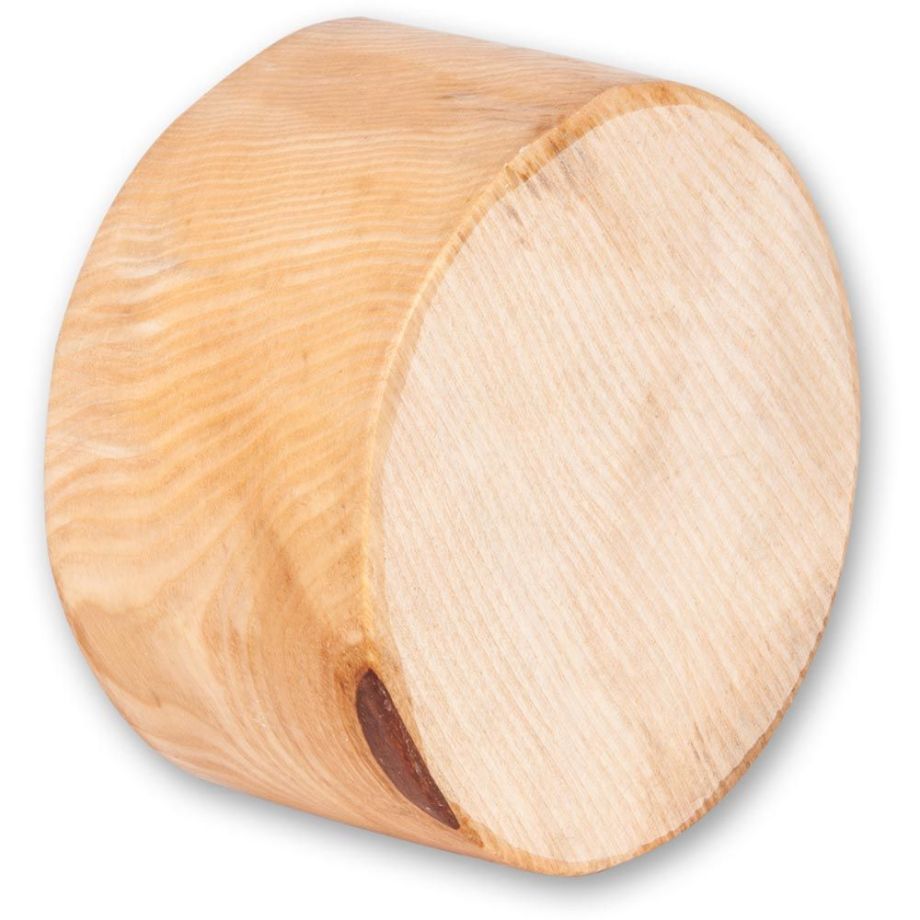 Brian is a woodturner whose health took a turn for the worse but the difficulty is being worked through. He’s of the vintage of most of Norton Shedders!

Some weeks ago Brian made contact following the article in the free newspaper. He should be able to turn smaller wood blanks (= the pieces of wood for turning) but he has also some large chunks that he knows will be beyond his stamina.

He also hopes to soon be able to visit Norton Shed (maybe in a month) and see how he gets on. He is a man of banter!!

Kevin (above) and Graham are to visit him this Monday afternoon to explore the blanks but the hope is we will have a good stock for the Shed and a skilled turner available to directly or indirectly train the rest of us up.

That is what happened in Whitby District Sheds with two woodturning veterans.

***** Visited Brian, met his wife Margaret, saw some of his woodturning and his cache of bowl blanks. 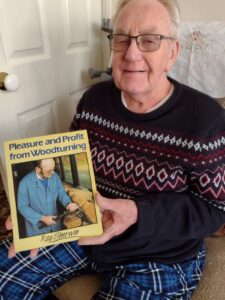 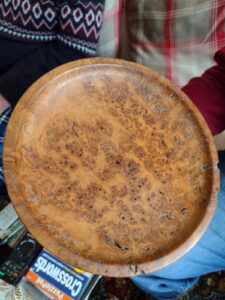 This is Brian holding a book “Pleasure and profit from woodturning” by the late Reg Sherwin, the master woodturner who inspired Brian.

Brian and Margaret’s home is like a museum of wood artefacts. Many years of craftsmanship and making memories.

Without doubt Brian turns for pleasure. Much of his home is furnished by his woodturning and cabinet making skills.

Brian hopes to attend the Shed in a couple of months time, after a programme of physio treatment.  We’ll then hopefully have an in-situ teacher!

We came away with the blankety blank below! This is 100mm (4″) diameter and the scale can be seen by the wire snips in the foreground and Graham’s hearing aids in the background.

A blank like this for making a wood bowl is strangely called a bowl blank! 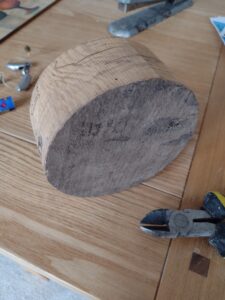 A nice bit of grain. 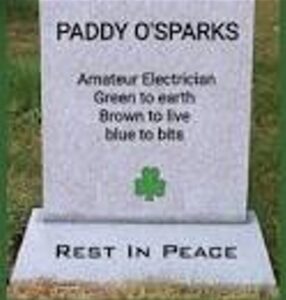 A cautionary memorial from BayThorpe Shed!

The UK Men’s Shed Association (UKMSA) wants 1000 stories of Shedders. How about you?

Our hope is that as many as possible of the “new” Norton Shedders and the Whitby District Shedders (a total of 4 Sheds) will provide – by interview if necessary – their stories about what led them to the Shed. what their first reactions were, how their relationship developed and what good it might have done them in terms of their wellbeing.

We also want to take some emotive photographs of the individuals so that accounts and photos can appear in an online book.

There will also be some short questions of a yes/no or 1 – 10 variety that can be used (anonymously) for analysis to provide some UK based evidence of the impact of Men’s Sheds on men and women.

As one of Northern UKMSA Ambassadors for Sheds, Graham will be encouraging other Sheds to do similarly so that the North is fully represented.

Sheds (as community places) began in Australia just over 20 years ago and there evidence has been available for a long time about the health benefits of Sheds, primarily for the retired. Sheds were until relatively recently all male places (so men could swear and cuss freely, though it tends to soften over time and with respect for others!). 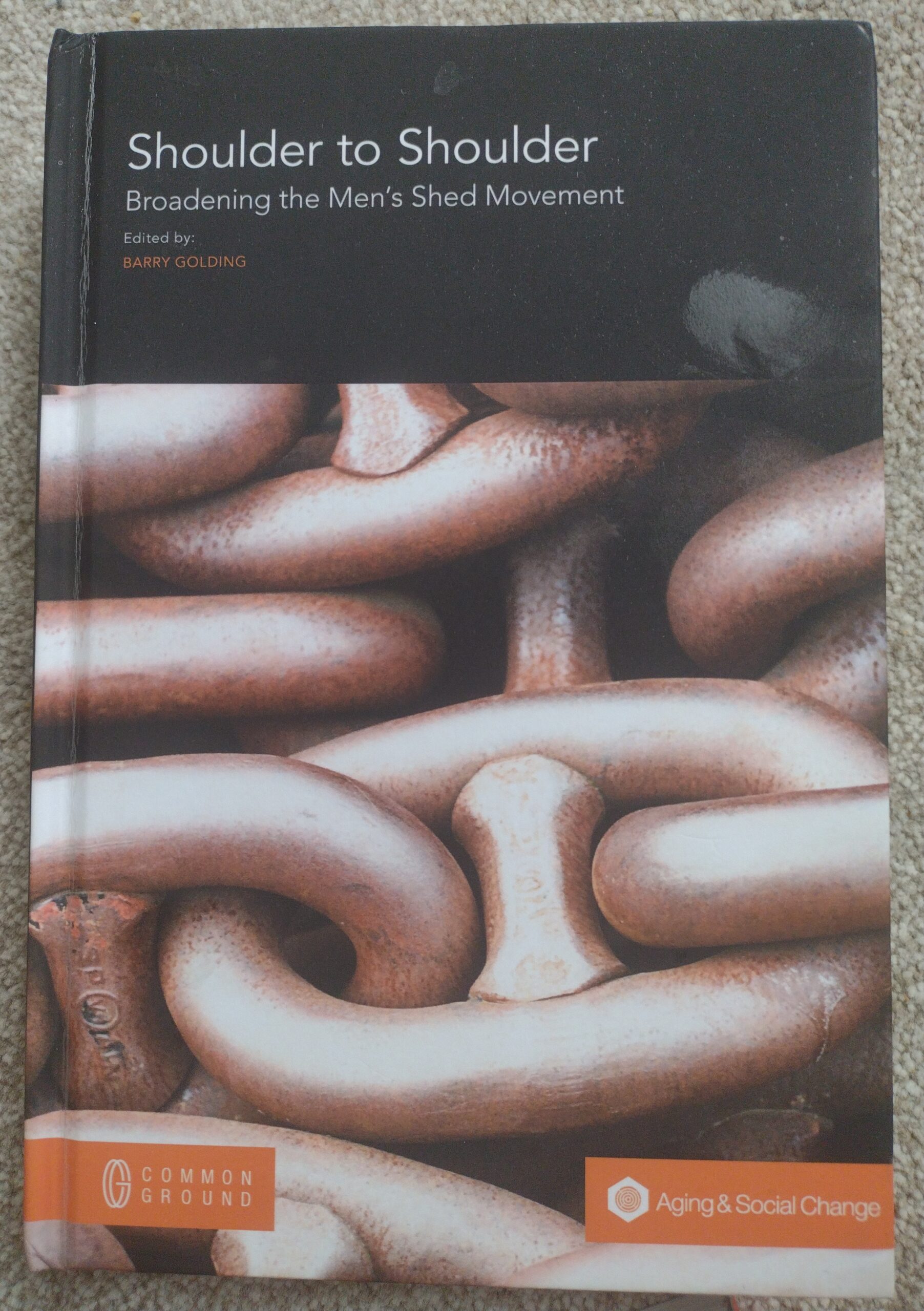 The Whitby Sheds know Aussie Len Thomson well (he’s a board member on AMSA, the Aussie national  Sheds body). Len knows about our exploits in Norton and has tracked our development. He has personally helped into existence a dozen Sheds on the Gold Coast).

Len has just attended the national annual meeting and there he bought a new book (a follow on from a book about 5 years ago) and read it! It was about the geographical expansion of Sheds and also the diversification happening to include (hmmmm) women. The latter, even in the UK, can be a slightly heated matter (not in Whitby and Norton, however).

Len knew that Graham had been approached well over a year ago to provide material on the Whitby Sheds as one of several UK case studies, but he had not seen the outcome. There was a page on Whitby and particularly the experience with women and Sheds. No surprises to Len really,

What he picked up on was a paragraph at the end of the book – where findings were summarised – because there was a paragraph that highlighted the Whitby experience and how some difficulties had been suitably resolved.

Below is what Len sent, though Graham had bought the book last year when it was published. 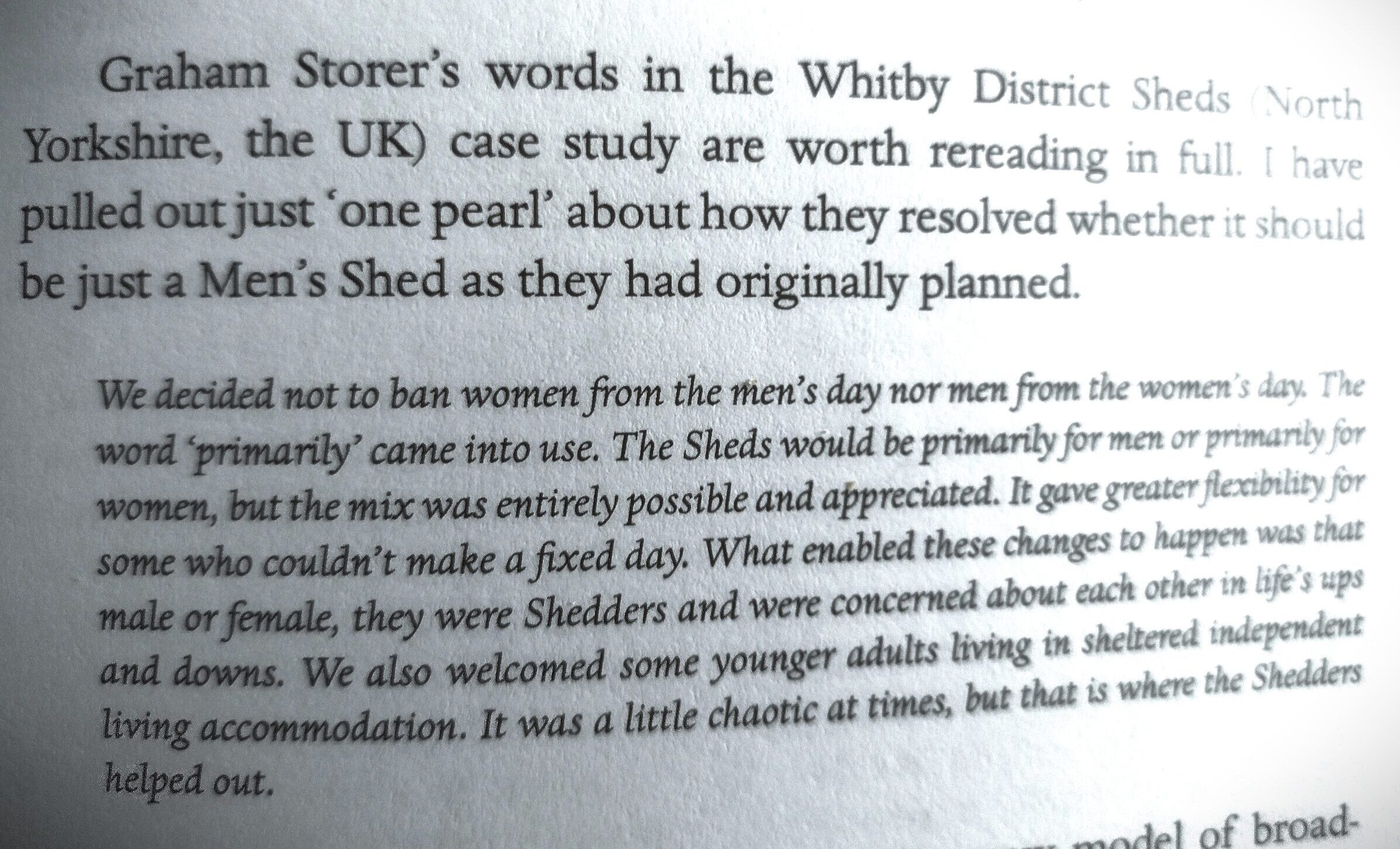 Never thought that Graham dealt in pearls! Graham has the book and you can borrow if you want to read more about the evolution of Sheds worldwide or just the page on Whitby District.