Home Uncategorized I Don’t Believe It!

I Don’t Believe It!

One foot in the grave. With Norton Shed we are trying not to put our foot in it!

It’s hard to believe certain things when they happen. Life in a Shed (even when it is just an evolving idea) is often full of surprises and sometimes they are like buses, coming along in threes or more.

Surprise 1. Wednesday 5th January. Received an email out of the blue from Preston Park Museum presenting the possibility of some equipment our way.  A nice surprise to have such a communication.

Surprise 2. Thursday 6th January. Spoke to Preston Park and learned a bit more about the equipment. It is 3-phase equipment so not for plugging directly into a 13 amp socket. A fun chat with a ranger very much in the Shed spirit! D 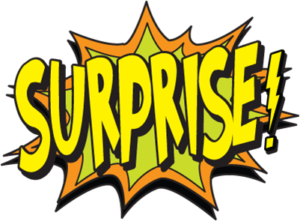 ecided to visit the Museum on Friday and take DaveR with me if available because he cannot attend the Costa meet on Saturday at 4pm due to his shift. No answer from him – maybe asleep??? (This is banter DaveR). Gary was tied up on Friday (there’s a joke in there somewhere).

Surprise 3.  Friday 7th January. Received an email from one of our contacts, PaulH, who had been away in the deep South for Christmas period (in the depths of where Graham lived for 40 years :-).  Called him and discovered he was an electrical instrument technician in former days (now a budding artist). Well, 3-phase equipment (whatever that is) and someone who might know about these things led to the arrangement that he (and a friend) came to Preston Park too.
Also had a call from Claire Walker of the Norton practice who did some calming therapy on me and then wound me up! (not true, either part).

Surprise 4.  At Preston Park we were a bit thwarted because the equipment is in a container and not easily accessible to view, though photos have been taken to be forwarded.  Not to waste a visit, the three of us took refreshment in one of the Victorian tea shops.

As we sat there in conversation about Sheds and life, a figure passed the window. It was DaveR with his wife (yes, the man who may have been asleep the previous day). We sat at two adjacent tables and shared café banter :-).

I hope we all continue to have pleasant surprises.

Surprise 5. On BBC Look North there was a feature about women now being allowed into Scarborough MATES Men’s Shed.  Men And Tools Enjoy Sheds.  Sleights Shed helped MATES get started and after struggles with premises for a long time they now have a very interesting venue. Very shortly after watching the piece on Look North Graham received an email from a man not far from Norton enquiring about Sheds generally. Could he have seen Look North and done some Googling to find us? Should know more on Saturday morning. 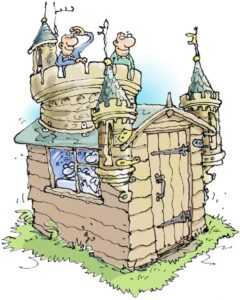 Spoke with the man. He did watch Look North and saw the Scarborough Mates item. He Googled UK Men’s Sheds Association and located us from their Find a Shed map where we are identified as being “under development”.

Well, there’s always a lot of happenstance in starting a Shed. However, the common feature is to be making contacts with some key bodies with whom to work.

By coincidence this week a Shedder from Whitby rediscovered early paperwork on the Sleights Area Men’s Shed (SAMS) from March 2016 (when it opened). Part of it was a presentation given to the great and the good and the rest of us about the importance of Sheds. Since then Sheds in UK have nearly tripled in number to ~650. 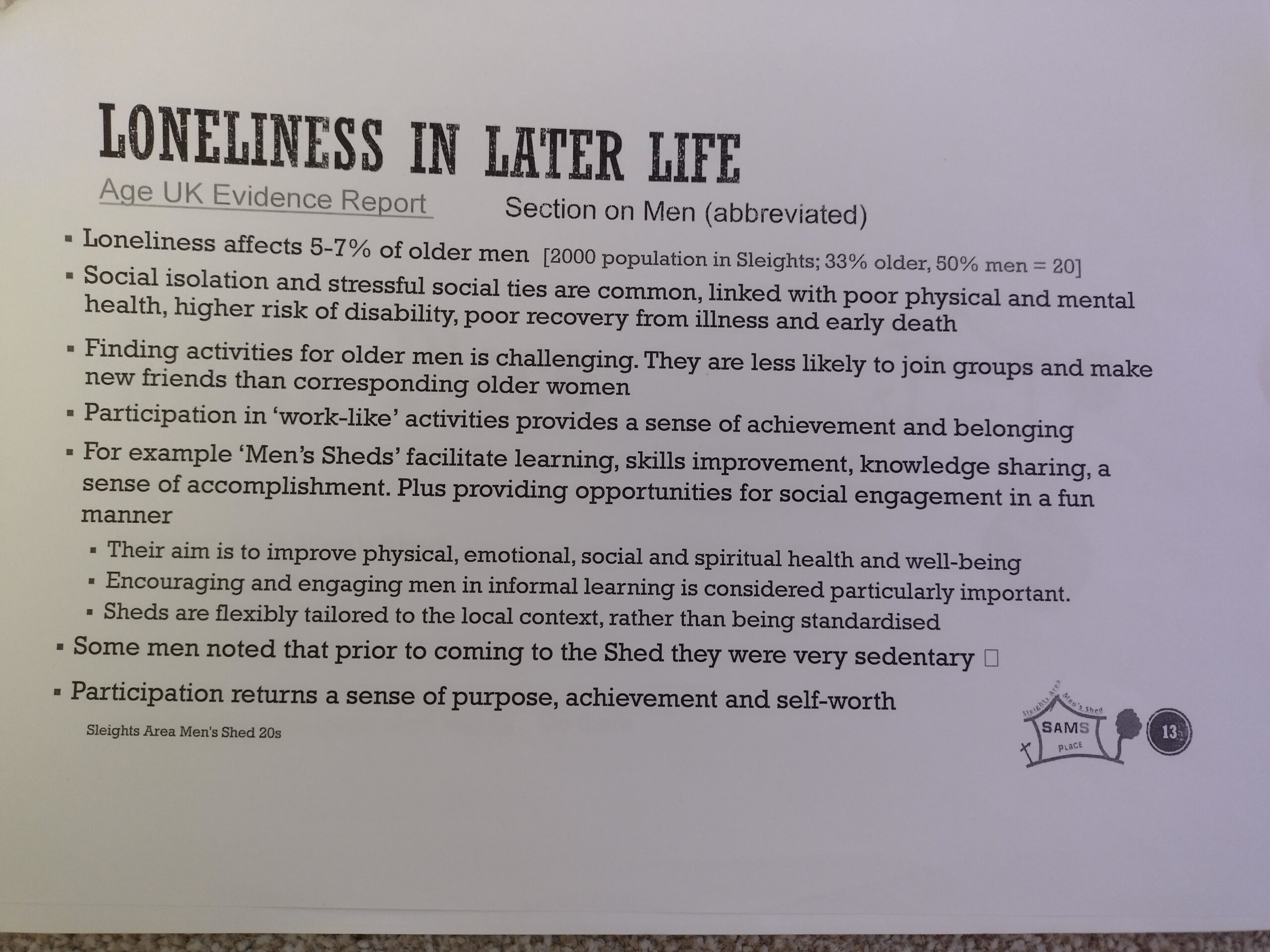 The demographics in Sleights was weighted to older people (it is a retirement area).

NORTON at present is yielding people who are not elderly – some indeed working – who lack contact with others. Lack purpose and needing a bit of motivation. Part of it is the move to home working in response to the pandemic and the concern that this changed work pattern may be a more permanent feature of future life for many. It works for businesses and individuals quite well BUT it is being realised that it can come at considerable cost to wellbeing.

We are social beings (well, some of us anti-social) and we need to belong to things and people beyond our 4 walls.

Once the Norton Shed is properly functioning, we will be able to welcome those with other reasons for feeling cut off, including for instance those with health conditions. 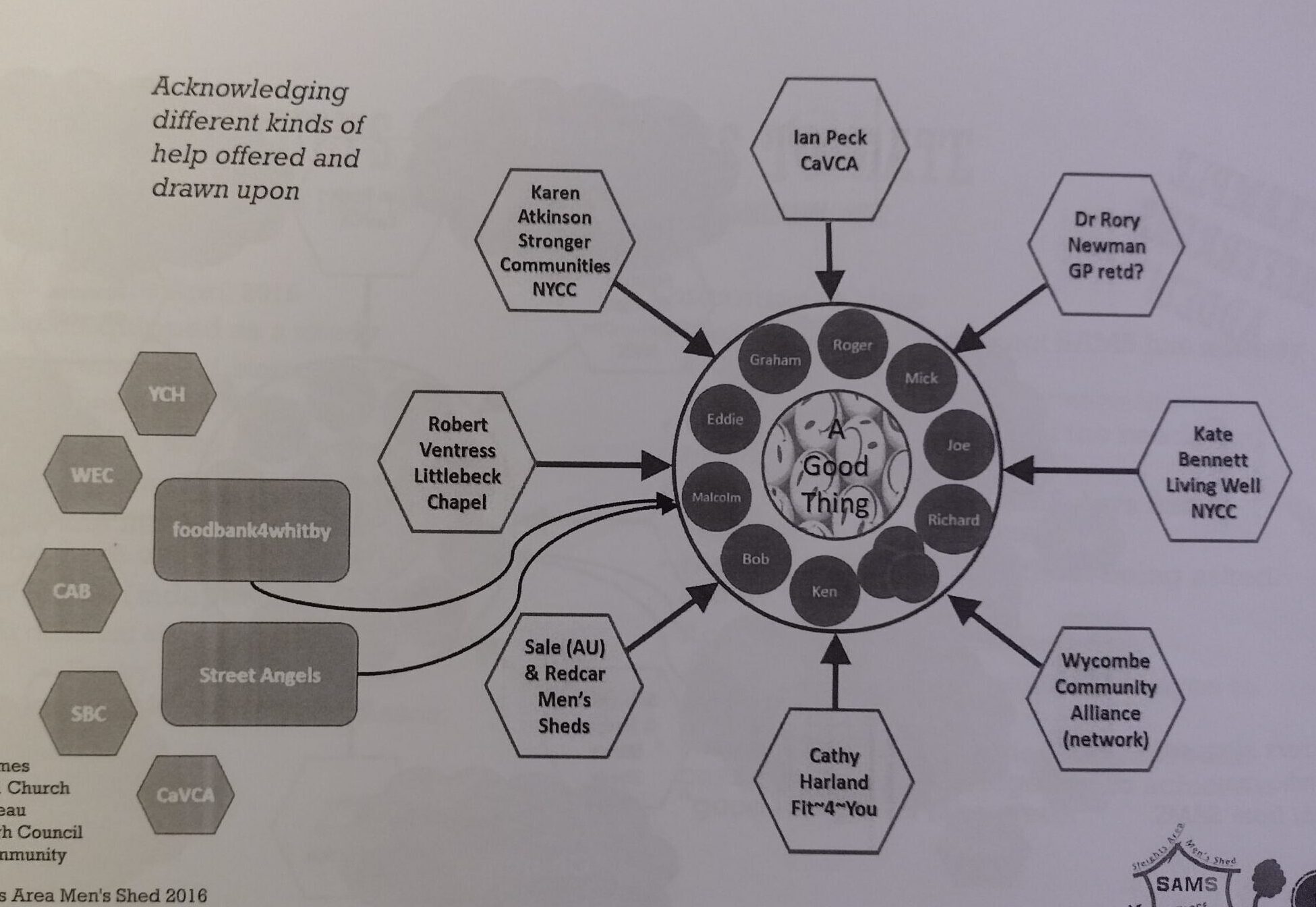 Apologies for the quality (will try to improve and replace). The above shows the various types of contact that helped the Shed take some shape in the first 3 months, To SW is mention of Sale and Redcar Sheds for instance. Sale Shed is in Australia which was the first Shed Graham ever saw and Redcar was a Shed under development at the same time as SAMS. We learned from others.  There is a Chapel mentioned (venue) and Living Well (rather like Claire’s Link Workers). There’s a Keep Fit class where the art of belonging and banter had been crafted. 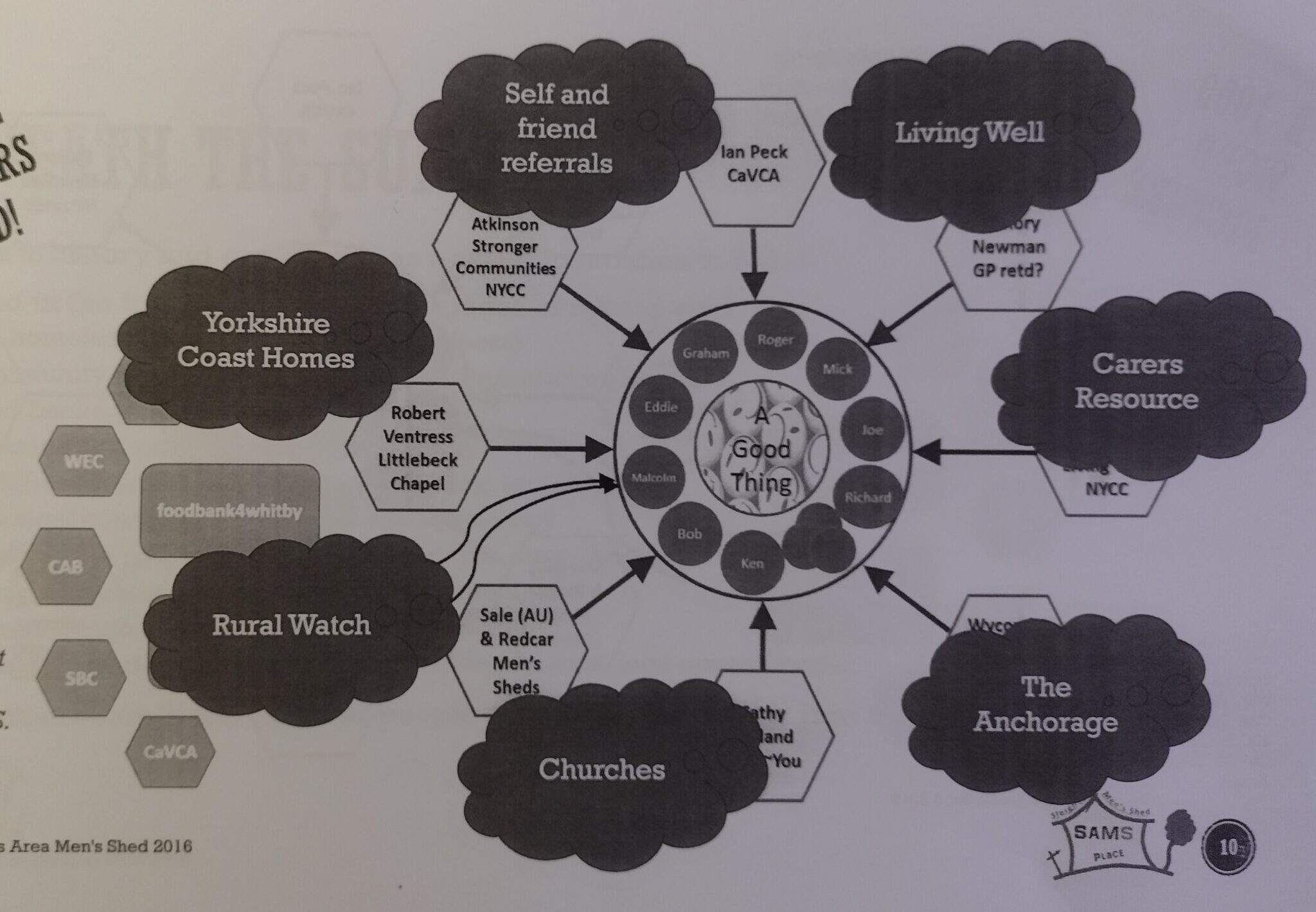 This is an overlay to the previous picture simply reinforcing the categories of organisations/people involved.

We are making very similar connections in Norton or seeking to join in existing collaboration forums.  Soon we will develop a picture on the same lines as this.

What are the most important connections? Between the Shedders as they build their Shed.

IF YOU HAVE A VIEW ON THINGS, please forward to graham_storer@btinternet.com