The point has been made previously that Sheds are built person by person. The nucleus of Shedders grows literally one by one. People are the bricks but their ability to relate to one another is the mortar that binds and makes a Shed resilient and  something worth belonging to.

Sheds can be and ought to be part of the fabric of a community. A strong node in a network of other strong nodes that exist to support and sustain a place. 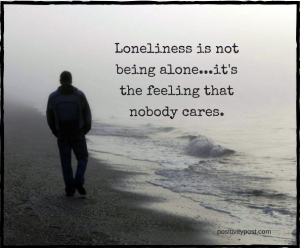 This was so evident of the first Sheds Graham saw in Australia in 2014. They were not top down organised by a local authority but bottom up powered by those who came, some more able than others.  They were nodes known in the community because over the decade or more of their existence many men in different families had passed through the ranks and benefited. Sheds were an accepted, respected part of Aussie life.

In Frome, Somerset, a Shed was started in 2014 that happened to coincide with an experimental project funded by the NHS almost as an experiment. It was led by a local GP who idea it had been for some years. Letting ordinary members of a community act as sign-posters to help for others they came across.  It became known as the Compassion Project and it had a remarkable impact (with other initiatives including Frome Men’s Shed) on the atmosphere of Frome – it’s thinking culture.

These are examples of things happening on a larger scale. At the same time a Shed like Norton Shed can do mini connections to other things.  Already we have developed some good relationships with others including the Social Prescriber Link Workers, Norton Sports complex, the Forge on Norton Green and some local businesses too.

One of the hopes that we have is to work with some other initiatives and parents to help children and young people in a similar way to adults.  Isolation and loneliness are factors that affect people right across the age range. To do this individually as organisations is not easy (certainly not if it is to be sustainable) but doing something together can make it possible.

The “can” in the last sentence is an important word that is strongly connected to and enabled by “trust”. That’s the essential baking ingredient – the yeast that catalyses.

That’s enough of the theory. What about the practice? 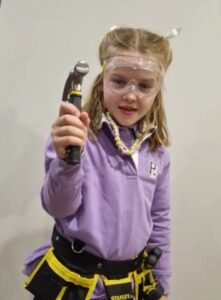 Yesterday, Graham’s grandsons played with a new ball game involving a vertical tensioned net on a frame to bounce balls off. Nothing unusual in that with it being played with in Graham’s back garden. The small community spark was to take it out front onto a grassed community area (soon to be under SBC). The grandsons were not long playing when out of the neighbouring house came father, young daughter and a dog.

We knew the neighbours a bit but with some encouragement from dad the daughter began to play with the game. What an ice-breaker as Graham held the dog’s lead!  There are some other local children close by and the aim is to generate a little bit of very localised community interaction. Why not a bit of bird box making for parents and kids sometime? An hour’s communal fun and some learning too.

It is not a long leap in thinking to see that the Portakabin might make a good base for a kids’ workshop with parents too.  Graham’s Aussie granddaughter is a good advert with a tool kit on her recent birthday.

It is important that Sheds are projects that allow what is done to cross into the public domain. Through the equivalent of the little perforations in tea bags!

This web-site is one of the tools that act in this way.

In Response to the last item in the previous blog asking for any other ideas for decor on the front of the Portakabin a new “remote Shedder”  contact has proposed the draft design below.

What appeals to Graham in this is how the design appeared. There is a deeper meaning to it than just being colourful.

“The idea is to show the shed as a beacon of light in a dark, with it shining through the door.  This should be clear from the other side of the pitch. Important to note that the yellow stripe lines up with the top of the door on both left and right.”

Thanks to Toby for this. It carries a very powerful message indeed for Shedders of a light in a dark place.  It’s a Shed.  A Men’s Shed.  Norton Men’s Shed. SHED should be well visible.  The logo
If you have other ideas please do say.
Toby is also helping work in Whitby that involves the Sheds there indirectly.  He is employing his IT skills to benefit others. 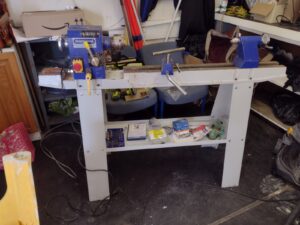 Rain threatened but did not in fact deliver until about noon. Derek and son Gary came and the 3 of us settled into inside work. Lathe was assembled and tested. Some more prep on the outside of the Portakabin (no painting because of rain) 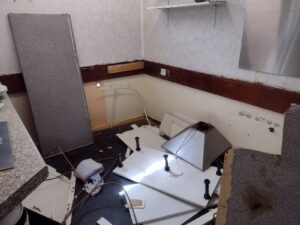 and then we turned our hands to demolition.

We ripped out the old kitchen units in the galley (very sticky from grease build up) and took down cooker hood. Nice clear space for a couple of units from Howden’s  also with worktops and cabinets on wheels for the main workshop. 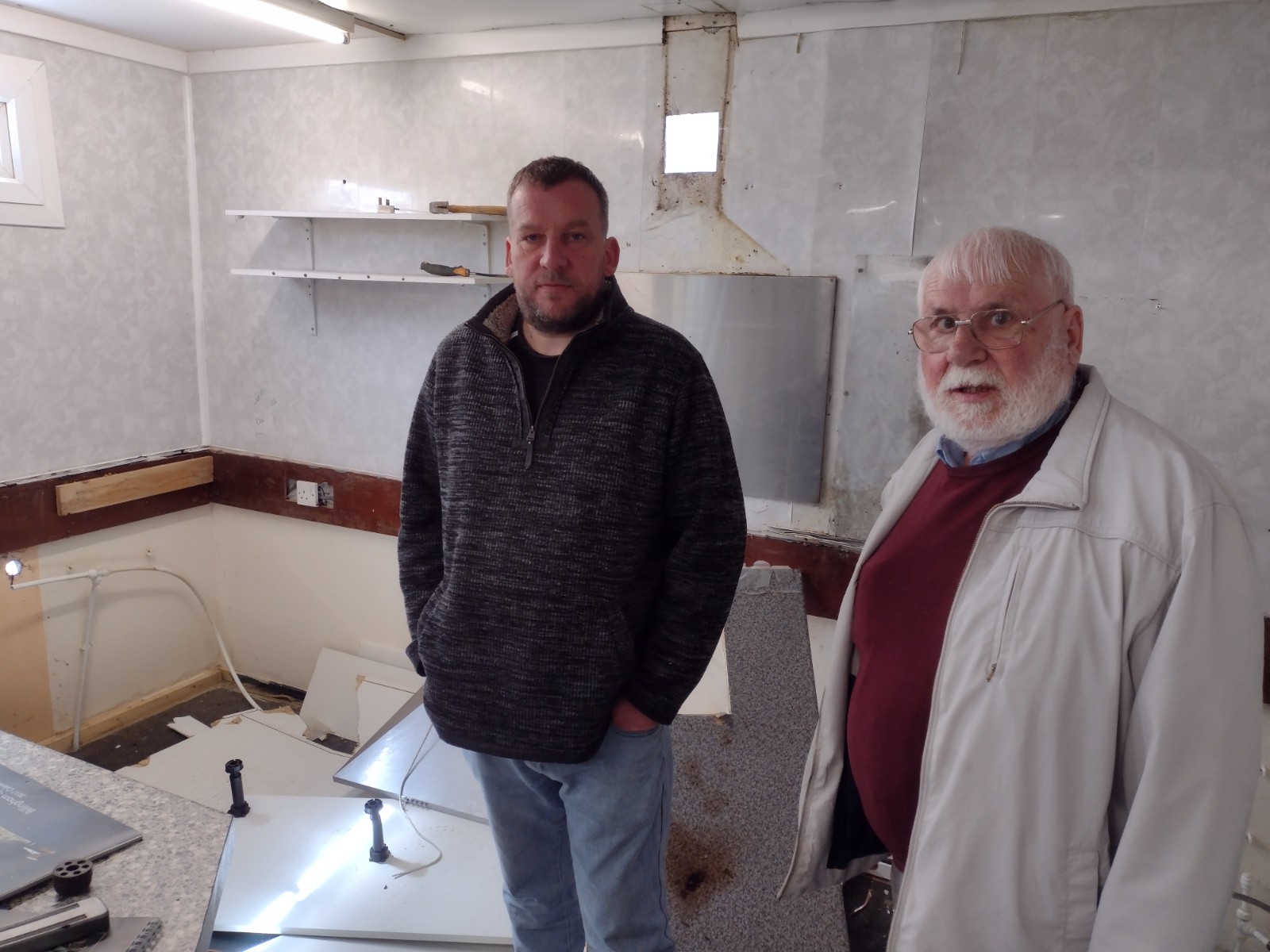 Derek & Gary aided and abetted the act of demolition!