Sheds are fairly green. They often reuse and upcycle. Pallet wood is a strong, good quality wood that can be planed and thicknessed to make some smart looking items.

In Norton, The Forge’s Helen Deeham is leading an initiative for a monthly green market using the Friends’ Meeting House across the green. At the Forge she has a counter and circular low tables that are pallet wood.

Norton Shed will be making signs for her – yes out of pallet wood! 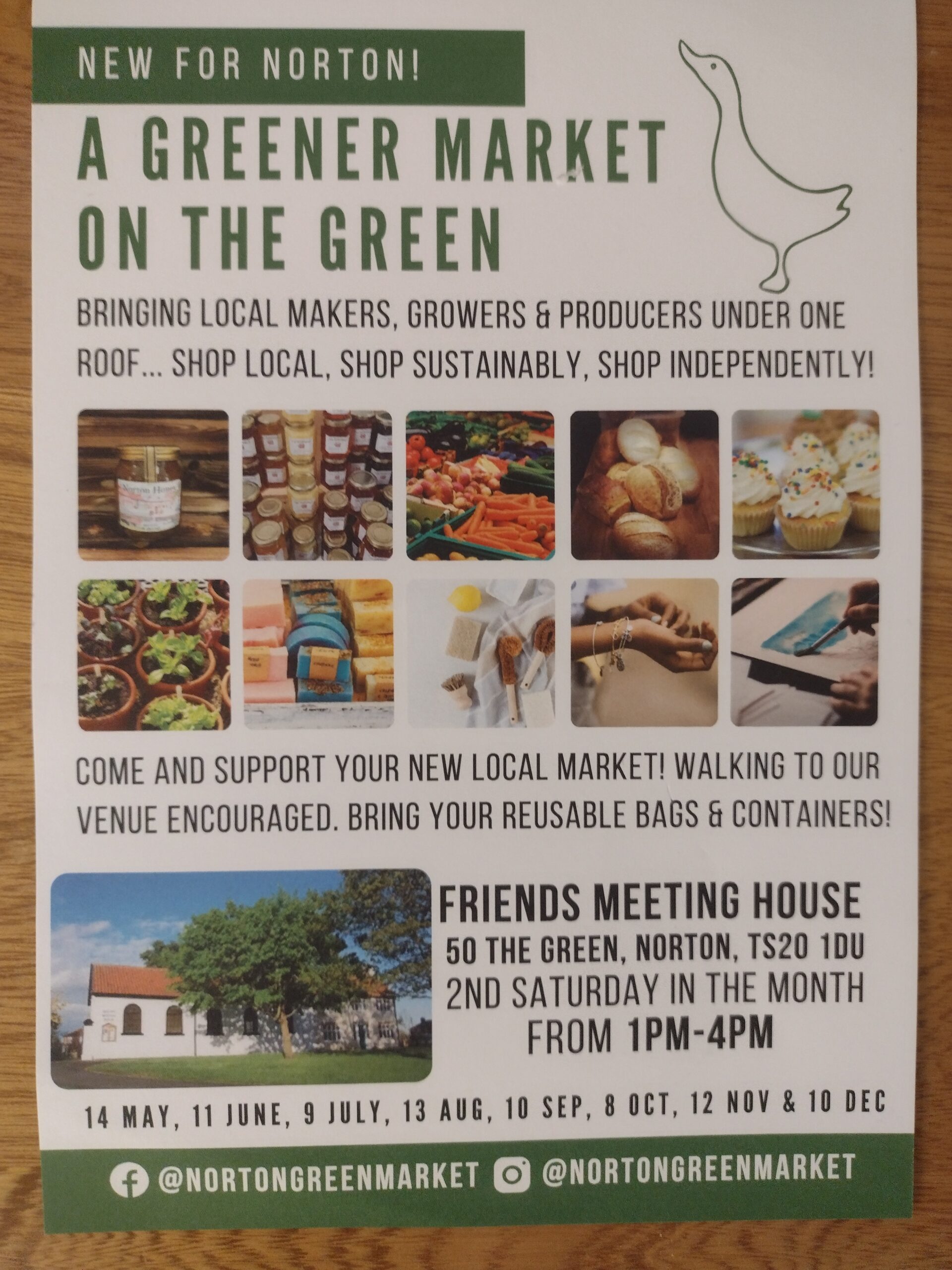 One of our Shedders, “Railway” Dave, makes some great items at home, some of which he sells.  These are sometimes made from what might be thought of as scrap wood.

These are some of the things that can be made on ce we get a proper workshop up and going. There is equipment for us and the Shed needs to make nest for itself urgently.

So far we have decorated at Norton Sports Charity’s cricket pavilion (that can be seen in black and white!) and recently begun stabilising the hut ‘at St. Michael’s. However it is not the kind of varied work a Shed thrives on which (as can be seen in Dave’s photos) includes craft woodwork. Doing, and for most learning to do, in the fun place! 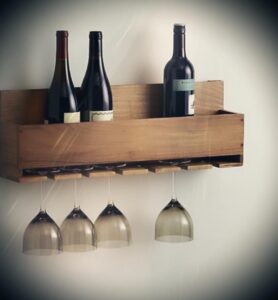 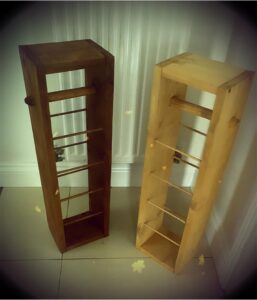 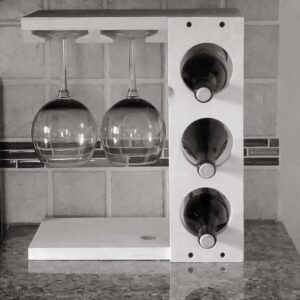 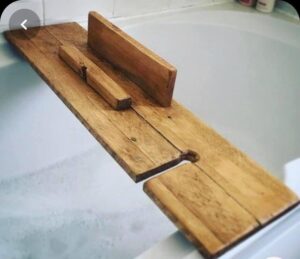 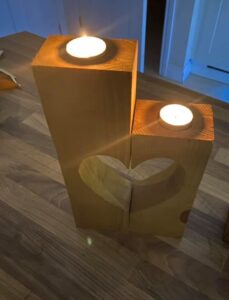 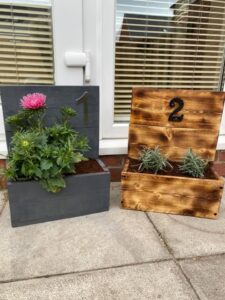 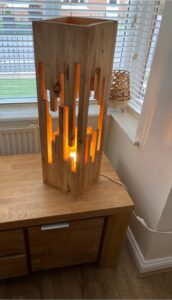 Two the the ducks from Norton duck pond (possibly) have been seen in the Suds (sustainable drainage system) basin in front of Graham’s house. Suds are part of keeping rainfall local and not finding its way quickly to sewers. The basin is unlikely to fill to be a permanent pond but it should stay soggy. Water plants are supposed to be planted shortly.

Hope the ducks help out by drinking some of the water:-) 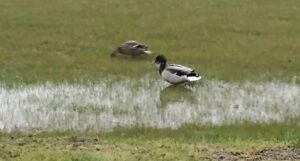 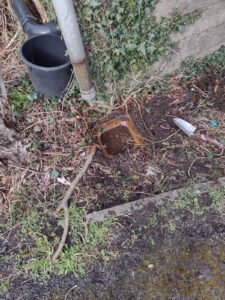 The drain was buried. Cleared it. 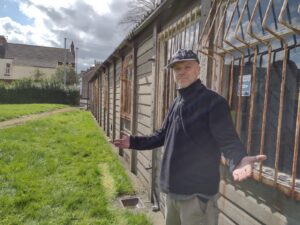 40m of guttering up on the sides of the hut.

A nice touch at the end of the morning was when Gary & Graham cleared the hall of a heavy builder’s bag of rubbish of rotted floorboarding. 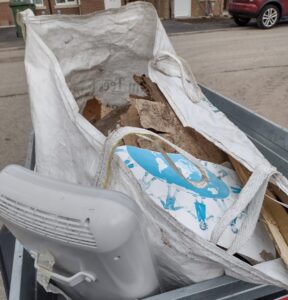 It took their combined strength with a few breaks to regain puff  in order to drag it to Graham’s trailer. Problem was how to lift it up.

Along the footpath came two fit looking black guys and Graham quipped that they look strong and would they help lift the bag! Job done at which point they turned into the foodbank entrance.

For 30 seconds they had become Shedders.

Gary went into the food bank himself and Graham remarked to the leader of the foodbank how helpful Gary has been since the Shed started. For Graham Gary is very useful – somebody else to blame when things go wrong.

The foodbank remarked how much more bright eyed Gary was recently (he has only started using the food bank in the last few weeks).   She said she had just told someone locally about the Shed.

Off then with the trailer to the Persimmon Homes site where Graham lives and where on a couple of recent occasions they have let Graham dump rubbish into their skips from the hut. They brought along one of the pieces of lifting plant and, hey presto, it was all skipped!

A lady was introduced to the Shed via one of the Social Prescriber link workers.

A 79 year old who looks and behaves about 10 years younger. She was due to come to the Shed on Friday but after a telephone conversation she suggested we meet up for a Costa chocolate.

Graham had been warned that she would be a surprise. That was so. Very outgoing and expressive on the phone and more so in person.  Graham had not met Pat so was waiting in Costa near the door where 3 men were sitting. One exchanged a joke about a bird with a sweet – a tweet!  Graham overheard it and said it was an awful joke. That got a  bit of mutual banter going.

Graham sat at a table facing the door looking for a woman. You know what I mean. In came a candidate and Graham stood up but she immediately started talking to the 3 men whom she clearly knew.

Graham sat down again but then she moved away from the group and they pointed over towards me. It was the woman!  She explained they were men from the Destiny Centre where she worships. Thus a few minutes later we went over and joined them for what was clearly going to be a session of Shed-like banter. Indeed so, rudeness to each other.

It turns out that one of the men (with his wife) runs the Stockton Moses project for adult males with past and present drink or drug addictions. Look them up https://themosesproject.co.uk/

Speaking to the Link Worker later about her, Graham mentioned the Moses project and, lo, the project  works very closely with the Prescribers.

Thus, Graham’s search for a woman resulted in finding 3 men, no boat and the woman. Not a bad morning’s work.

Probably off to the Sports Charity for a first permanent home.

For various reasons the hut at St. Michael’s is not now to be Norton Shed’s main home. There are some primarily food based projects being planned. The basic kitchen that the Shed was to reinstate as part of help to the church is required to be larger.

One thing that Shedders know is that residual dust and food preparation don’t go hand in hand where the public is concerned. Shedders can poison themselves as consenting consuming adults (just as families can) but food hygiene for food provision places higher responsibilities on everyone.

So, the Shed has done a good job on starting refurbishment but it seems an appropriate time to pass the baton on, not least because other early uses will incur delay in our need to get a “normal” Shed going for a wider range of normally abnormal people who become Shedders.

Later this month NORMENS  hopes to become a Shed centred on the Sports complex.

Maybe we will use a hut deep in Norton Sports Charity’s  forest where we might play at being  bodgers with a pole lathe.

Bodgers in the Chiltern forests around High Wycombe in former times would often live in crude huts in the woods for much of the time to minimise commuting!

A pole lathe (and a shave horse) of the type used by the “bodgers” in Chilterns who made spindles for chairs. High Wycombe was once a noted furniture manufacturing town where Graham spent 40 years of his adult life.

As Gary and Graham were guttering at the far end of St. Michael’s site, a lady asked over the fence if we were taking the hut down! She was surprised and pleased that something was being done to improve what had been decaying. She could remember girls’ marching bands rehearsing there with marches starting there too.

It transpired she made felt from sheep’s’ wool and was involved with Billingham theatre group . After chatting she asked whether the Shed might ever help them with making stage sets. That we did once in Whitby.

This is the kind of “community service” a Shed can provide.